What happens when career girl Victoria Bryant meets devastatingly handsome English businessman James Wellington at a corporate function in Atlanta? Their world's collide but he leaves her, alone and lost for another girl he knew before. Will a chance meeting in Memphis on Winter Solstice reveal what they really feel for each other and bring the magic of love into their lives?This Wiccan novella is available for only 99c throughout the holiday season.

Believe in the magic of the season.

myBook.to/MnMYule
Follow the MAGIC IN MEMPHIS board on Pinterest.
Magic in Memphis was originally published as part of A Celtic Tapestry, a Moon Rose Publishing Anthology.
Posted by Exile on Peachtree Street at 11:11 AM No comments: 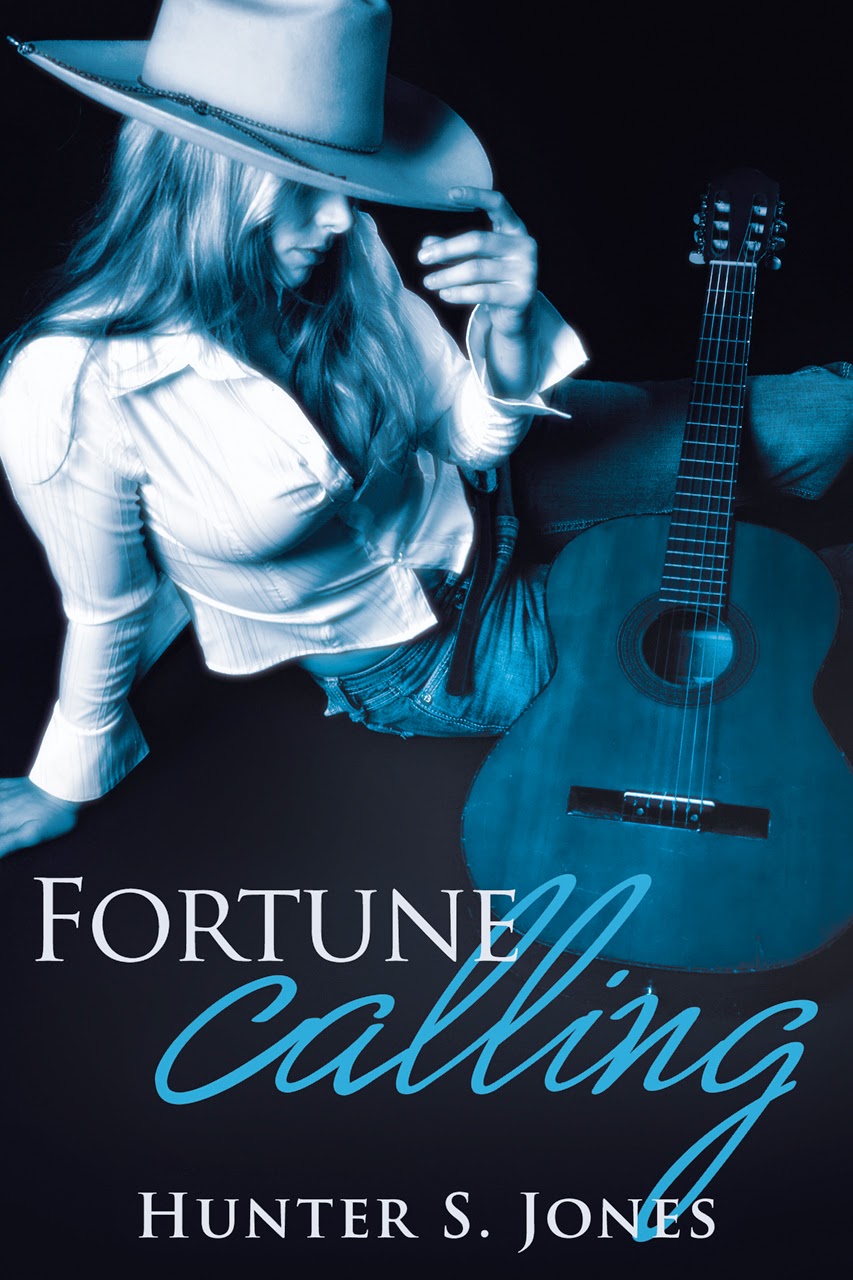 Dallas Fortune is a small town girl with a gift for playing guitar. A member of her family has played the Grand Ol Opry since it began as a simple radio show in 1925. But, they are the minstrels, the troubadours--session players--not stars.Dallas lives her life on the road. She’s just another guitar player with a dream until she finds an antique blue mandolin in a pawn shop. Her life comes into focus as the enchantment of the mandolin captivates her audiences. The Guitar God of Nashville beckons her. Everything is there for Dallas at last, until a stage accident sends her home and shatters her dreams. Blow after blow she fights the hand of fate. Is she destined to lose out in life? Hope, dreams, and love seem to be just out of reach. Every girl dreams of a happy ending. Dallas Fortune has the best Fairy Godmother in Country Music history. Will she help make Dallas’ dreams come true?

Is the future among the stars, in the cards or locked in your heart?

You can download FORTUNE CALLING for FREE on Amazon, November 20 & 21. Get it now! It's been a Kindle Short Read, Historical Fiction and Cultural Heritage best seller on Amazon. Find out why today.

Posted by Exile on Peachtree Street at 7:55 PM No comments:

When Simi finds a pretty old candlestick among the discarded props in the company storeroom, she never imagines it will grant her dearest wish. There’s something mysterious about the carved candlestick, but Simi is drawn to it. She’s saved a red candle from a box she bought years ago in an antique shop, and intends to use the candlestick to hold the last candle and make her solitary Christmas lunch more festive. It’s Christmas Eve, there’s sleet in the wind, Simi slips, but Jason catches her. Who is Jason? Where has he suddenly appeared from in the night?
Simi looks into the eyes of this gorgeous man and sparks fly …

The space between them pulsed, making Simi feel as if he actually pressed against her. The atmosphere suddenly laden with sexual tension, Simi stared down at the parquet floor as she led Jason down her apartment hall to the living room. She stopped and turned to him. He loomed in front of her like a magnet of pure sexual temptation. She dropped her bag by the coffee table and unbuttoned her overcoat. She dared to look into his eyes as she slid the coat off.
“Let me take your coat. The heating is on. We’ll get warm quickly now.” Her voice shook a little.

Jason took his overcoat off and handed it to her with a smile in his eyes.
“Thank you.”
“Sit down. I’ll take these and put some coffee on, or would you like a glass of wine? I think I have some bourbon, too.”
His voice low, he slowly sat on the end of the sofa as he answered, “Coffee is very welcome.”
She practically ran to the coat stand that was halfway down the hall near her kitchen door. She pulled her business suit jacket off and hung that there, too. With a little skip into the kitchen, Simi put coffee on. She left it to percolate and walked back to the living room. With every step, the need to be held against Jason’s muscled chest again grew, until when she saw him sitting quietly on the sofa, her heart gave a huge flip.
Protected COPYRIGHT ELODIE PARKES and SIREN PUBLISHING 2014 ALL RIGHTS RESERVED, DECEMBER 2014 RELEASE
Find Elodie:
http://elodieparkes.blogspot.com
http://www.facebook.com/ElodieParkes
https://twitter.com/ElodieParkes
https://plus.google.com/114681167004175190514/posts
http://a-fwd.com/asin-com=B00AHBYPO4

Posted by Exile on Peachtree Street at 11:47 AM 2 comments:

Posted by Exile on Peachtree Street at 3:20 PM 1 comment:

Seattle, THE UNDERGROUND and PM Briede

Blurb
In 1889, most of the city of Seattle burnt to the ground. The residents rebounded by using the ruin remnants to create the foundation for the new and improved city.

In 1965, Bill Spediel struck a deal with the new metropolis to turn a profit on the tragedy from almost a century earlier. Thus, The Underground was born, immediately spawning talk of ghosts.

In recent years, the myths morphed into stories of actual people living among the trash and filth that had built up beneath the city. These mythical people had become mockingly referred to as groundlings by the locals.

As the city is now held in the grips of a serial killer, Oz Seidon can't seem to focus on anything other than the groundlings. Having never put much stock into them before, a recent rash of sightings has piqued his curiosity. Oz intends to disprove the legend, using the research as an excuse to focus on something other than death, that is, until he stumbles upon one and learns how close to this story he really is.

Bio
I am a lover of all things artistic. I grew up surrounded by the performing arts both as a spectator and performer. That love of creation and design is the fuel for my writing now. Being able to create and entertain is a dream come true.
The imagination is a powerful thing, able to take you places you never dreamed. I write realistic fantasy. The idea of the possible having impossible explanations fascinates me. That idea is the driving force behind the Charlotte Grace series and The Underground.If you are interested in receiving updates when I release new books, please visit me on Facebook at http://facebook.com/pm.briede

1. Introduce yourself to readers in 100 words or less.
I’m PM Briede, a writer of romance you can find in almost any situation.  I currently have four books out, the Charlotte Grace trilogy, Smoldering Embers, Wild Fire, and Ashes.  My fourth book, and first standalone novel, The Underground.  My stories are never exactly what they seem and filled with twists and turns that have profound impact on my characters.

2. How long have you been a published author?

About a year now.  I released Smoldering Embers on my own in September 2013 and then was picked up by my publisher in October 2013.  We pulled my version, made some changes, and they re-released it in December 2013.
3. Do you write in one particular genre, or explore a variety of stories?

The Charlotte Grace series is paranormal romance, which is what I thought I would write exclusively when I started.  My next series, The Empathy Delacroix series, which will be released next year, has a more criminal element to the storyline with a touch of the paranormal.  The Underground is not paranormal at all.  And my current work is steeped in demons.  So I'm a little all over the map, but in general my writing focuses on relationships and how situations and circumstances change people and therefore their interactions.
4. Where do you get the ideas for your stories?

All over the place.  Charlotte Grace and Empathy Delacroix were both from dreams.  The Underground was from the underground tour in Seattle.  My current WIP is from wandering the cemeteries in New Orleans after my grandmother's funeral.  I just take a look at the world and wonder what could be different about it.
5. What is your writing process

I write linearly and organically.  Short of some very specific ideas, I let the story tell itself.
6. How much/often do you write?

I used to write for a few hours everyday after work.  Now that I have books released and am doing events, I try to get 10-15 hours in a week.  All in the evenings or on the weekends.
7. Do you have readers or betas who critique your work before you submit for publication? Why do or why don’t you think this is important?

I had a friend read Charlotte Grace before I published it and of course she thought it was amazing.  So I published and found someone to read review, and they politely panned it.  It hurt at the time but it was good.  I needed that unbiased feedback.  I reworked a few things then got picked up by my publisher.  They have been amazing with great insight into my strengths and helped develop and improve my weaknesses as a writer.  I have four fans who agreed to beta The Underground, and that was fantastic as well because it gave me a little confidence boost.  For me, it's important on two sides.  I do want the constructive criticism.  My publisher has it in spades and presents his ideas in a helpful way.  I don't take them all but I do take some.  Then my readers can me insight and confirm whether my characters connect, not only with each other, but also with the reader.  That's what is important to me and I need to know that I'm doing it right.
8. Please tell us how you developed the concept for The Underground.
My husband and I went to Seattle for our anniversary last year and took the underground tour.  I LOVED it!  The structures were amazing and beautiful and haunting.  My mind went into a whirl.  What if people lived down here?  Could people live down here?  If so, how would that look and why would they be here?  I toyed with a more dystopian story arc.  I toyed with aliens and monsters.  And then I settled on lies.  How lies can hold not only a person but a people back.  That's the thematic arc to The Underground.  How do you get out from under not only the lies you are told by others but also the ones you tell yourself.
Posted by Exile on Peachtree Street at 7:05 PM 1 comment:

This is one of those posts I despise. A blog where a writer lets you know what they are thinking and feeling. But, I have to give you all a heartfelt thank you for this. I signed onto Amazon a few minutes ago to see how my newest launch was proceeding. Look what I found while there...

FORTUNE CALLING was inspired by Shine yet it took three months to write. Those 8269 words did not come easily. Eventually, the Story took over and wrote itself, as all stories do. Dallas Fortune and FORTUNE CALLING mean a great deal to me. There are a few things I have in common with Dallas and I am not going to share with you what they all are. Not yet.

What I will share is that Dallas Fortune suffered, yet she had faith, hope and the promise of love. Faith, hope and love. The greatest of these are love. This little story was my faith in the arts during a time of grief, the hope of better things to come and the love of my husband, father, some family, a lot of friends- very special friends, and now you - for downloading this story and reading it. I am so thankful today and love you all for enjoying my story.
Posted by Exile on Peachtree Street at 11:40 PM No comments: